When I was in the twelfth grade, my AP Literature teacher made us each write a narrative. There were no rules – it just had to be a story that exemplified how we felt.

I don’t know if this says anything about how I felt at that moment, but I wrote a story about two best friends; one was an aspiring author who only wrote in purple prose and the other had a simple life desire of being a nun (because, and I quote, “she was tired of boys and academic institutions).

I decided to title the project “Your Experiences Aren’t Universal” because that’s how I felt about the situations; Jonah believed he was an excellent writer and Lisa believed she would excel at being a nun despite the fact that she was the physical embodiment of the opposite. Both Jonah and Lisa could see through the other’s facade, but both failed to see that they themselves would not succeed. Ergo, their experiences and opinions were not universal.

This phrase stuck with me for the ongoing years and popped into my head every once in a while. The most significant time it appears in my life was a few days before the creation of this writing piece.

If I was the protagonist of life, this article would be about budgeting: the wonders of it, how to start, and why it’s something we all should do. It would be a smash hit with everyone, as they would all share my excitement for micromanaging finances, and realize that I was truly superior with the numbers and funds.

But, alas, the world does not share my fascination and passion of budgeting. I didn’t realize this until I brought budgeting up as a potential topic that my friend rejected. Not only did he not feel the same way I did about the idea, but he said he wouldn’t even be bothered to skim through it. Although there was absolutely nothing wrong with him not finding my idea riveting, it did make me think. I didn’t want to do my project on budgeting because I thought it was fun or because I wanted to educate my fellow college peers (although I would’ve said that was the true reason), but because I thought everyone enjoyed it and would find the topic compelling.

This disparity between what I believed and what others believe is aptly titled “the false consensus effect,” or as I like to call it: your experiences aren’t universal.

So what exactly is the false consensus effect? According to the American Psychological Association, it is defined as “the tendency to assume that one’s own own opinions, beliefs, attributes, or behaviors are more widely shared than is actually the case.” This is usually done in effort to normalize one’s thoughts, ideas, and actions.

As a cognitive bias, the false consensus effect often occurs when we’re thinking of opinions or beliefs that we deem somewhat important to us. For example, no one gets particularly surprised when someone says their favorite ice cream flavor isn’t chocolate, but one might get a bit shocked and defiant when they realize someone doesn’t share the same political views as they have.

Where Did the False Consensus Effect Get Its Start?

The false consensus effect was first introduced in 1977 by psychologists Lee Ross, David Greene, and Pamela House in their study entitled “The ‘False Consensus Effect’: An Egocentric Bias in Social Perception and Attribution Processes.” As you can tell from the title alone, it explored how people tend to project their beliefs and preferences onto society in ways that often satiated their own self-interest.

In his Stanford University Psychology course, Ross had an assignment for his students: they would have to go around campus wearing a sandwich board that read “Eat at Joe’s” for half an hour. They would then have to record how many people spoke to them and specific characteristics about each person. (In a second trial of the experiment, the sandwich board said “Repent” in effort to broaden the interpretation of the sign and eliminate any specific connotations that one may have). 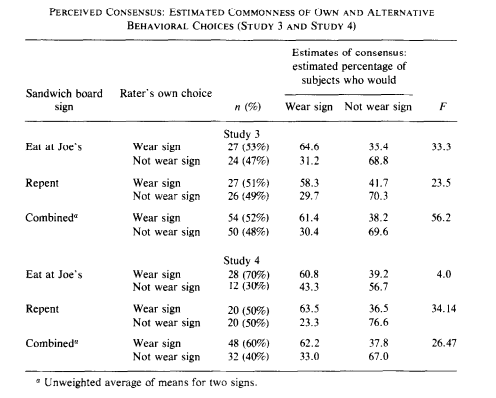 In reality, it was proven that it didn’t matter which option the student chose and whether or not they were in the minority. They still believed that their opinion was the majority. Furthermore, Ross and his colleagues discovered that the students were more likely to give “…extreme descriptions of the characteristics of people who would choose the alternate options.” This means that they believed their beliefs were common sense for the greater population and others who didn’t think like them had to be vastly different.

In 1985, psychologists Mark D. Alicke and Edward Largo further cemented this theory in their experiment “The Role of Self in the False Consensus Effect.” The abstract follows as such:

What Alicke and Largo concluded further built on the false consensus effect. It occurs based on what we believe and experience rather than simply the generalizations of topic details.

Why Does the False Consensus Effect Happen?

In attempting to explain why people experience this effect, Effectiviology compiles an excellent six-part list:

What Is the Impact of the False Consensus Effect?

We need to begin to evaluate how we think and where our biases stem from, as they will force us to judge others with or without our consent. As this judgment directly impacts how we treat them and what opportunities may be available to them, we need to thoroughly evaluate or thought processes.

For example, say you’re on the hiring committee for an entry-level sales position. You have an interviewee coming in at noon and you’re very excited, as he looks excellent on paper. Although he comes from an economically challenged background, he is persistent with his academics and has the drive your company strives for.

When he arrives, his appearance is sub-par at best. His belt and shoes do not match, his trousers drag a bit too much, and he is missing a blazer. Still, he attempts to remain confident in introducing himself, and flows through his interview.

Although you want to mark him well, the appearance factor still bugs you. In college, you attended several career service events that explicitly stated the importance of how one presents themselves. Additionally, colleges these days hold plenty of business clothing drives for frugal students. If anything, he could rent a suit with the money from any of the two jobs on his resume.

As this position in question involves meeting with clients, first impressions play a big role. You know this is something that can be easily fixed with a talk through, but you feel that if he can’t get such a simple yet vital detail of the interview process correct, he isn’t the employee for you.

So you turn him away for another applicant that didn’t perform as well, but had his first impression make up for it. You feel as though he will eventually be able to improve with trainings and further aid.

What you seemed to forget through this whole process is that your experiences aren’t universal. This means neither are your thoughts, beliefs, and actions.

The false consensus effect extended into two different directions in this example. Your projected opinions failed the first applicant, but the second benefited from it.

The assumptions may have basis, but you still chose to outlay your own beliefs and opinions on others. You assumed that the first applicant knew, or shouldn’t known, that he should have dressed better and chose not to, and thus did not deserve the position. Rather than giving him the benefit of the doubt, you chose to overestimate your experience on him: your college campus had clothing drives and you had friends with clothes you could borrow. He does not live the same life you had, but he did his best.

This example is not to rove that you should always go against your better judgment, but that the false consensus effect does exist, and that it does impact others’ future opportunities. The second applicant may prove to be the superior employee, but that does not negate the fact that you still applied your own experience onto others.

How Can We Start to Undo the False Consensus Effect?

While the effect allows us to feel as though we fit into society and relate more to others, it can often do more harm than good. It is also human nature for us to have our natural biases, but realizing that we do is the first step to dismantling them.

I want to highlight two of User Testing’s strategies to avoid the false consensus effect: to identify your assumptions and to have conversations with your target market. By identifying our assumptions, we can begin to ask ourselves why we think certain things are the way they are, and begin to realize that that isn’t how everyone views the world. The next strategy, having conversations with your target market, can help us view how others live their everyday lives. This will allow us to differentiate others’ existences from our own.

Although your experiences aren’t universal, it doesn’t mean they aren’t pertinent to creating you. These experiences should make up who you are rather than who you perceive others to be.